In 1966, the NHL ruled that teams must always have two goalies available. Under the collective bargaining agreement, teams may sign an amateur to a one-game contract. This means that even when the dream seems dead, there could always be a chance so never give up.

The following are 5 situations where NHL teams could have used Puck App to rent a goalie in minutes. Imagine if you got a notification for an NHL game on the app? Would you accept? Would you think it was real?

Andres Lindback got injured in the warm up and backup Luis Domingue got the start. Coyotes equipment manager called up his son-in-law, Nathan Schoenfeld to be the backup. The best part of this story is that the team gave him the MVP for the game. Take a look at this video

This is easily the best emergency goalie story because Jorge Alves actually got to get on the ice and was officially registered as an NHL goalie. Jorge Alves had been the Cane’s equipment manager for 4 years. On occasion, he would take a few shots here and there in practice and was good buddies with all the players.

Early Saturday afternoon, starting goalie Eddie Lack let the team know that he was sick. The GM then decided to sign Alves to a 1 game contract to back up Cam Ward. It was a dream come true for Jorge. He had played out a similar situations 100s of times in his head over the years and finally, it happened.

The Canes were down 3-1 in the 3rd period with 7.6 seconds left when the video below happened..

With that Jorge Alves officially became the goaltender of record in the NHL.

“There were a lot of times, just thinking about the situation, looking down at the crest on my jersey and realizing what was happening. It just got really emotional, especially what happened at the end of the game,” Alves said. “That’s something I never expected. After the game, as I was taking my stuff off, I couldn’t hold it back anymore. It was real. It happened. With tears running down Alves cheek, his dream had come true.

Jorge Alves is a goaltender of record in the @NHL after coming in tonight's game with 7.6 seconds remaining. #HipHipJorge

Not an example in the NHL but in the OHL in 2012, the starting goalie was injured in the first period and the team didn’t have a backup available. Unlike the NHL, the OHL doesn’t require always having a backup dressed. Connor Crisp, their center had to put the equipment on as goalie. The team lost 13-4 but Connor made 32 saves and was given the 1st start of the game. Read the whole story here. 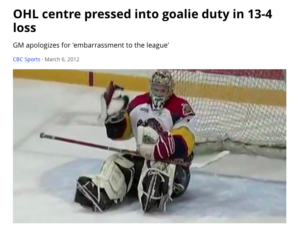 On Dec 3rd, Corey Crawford had an appendectomy just before their game and Scott Darling was the backup.

Enter Semborski, a 23-year-old youth hockey coach who last played for the Temple University club team in December 2015. On his father’s 58th birthday, Semborski got the emergency call from the Blackhawks and was in uniform 30 minutes before the 1 p.m. ET start time. The Blackhawks didn’t have time to get him a jersey, so they sewed his nameplate on top of Crawford’s No. 50 jersey. 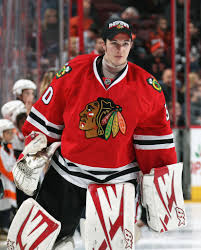 A Year in Review for Puck App
Scroll to top